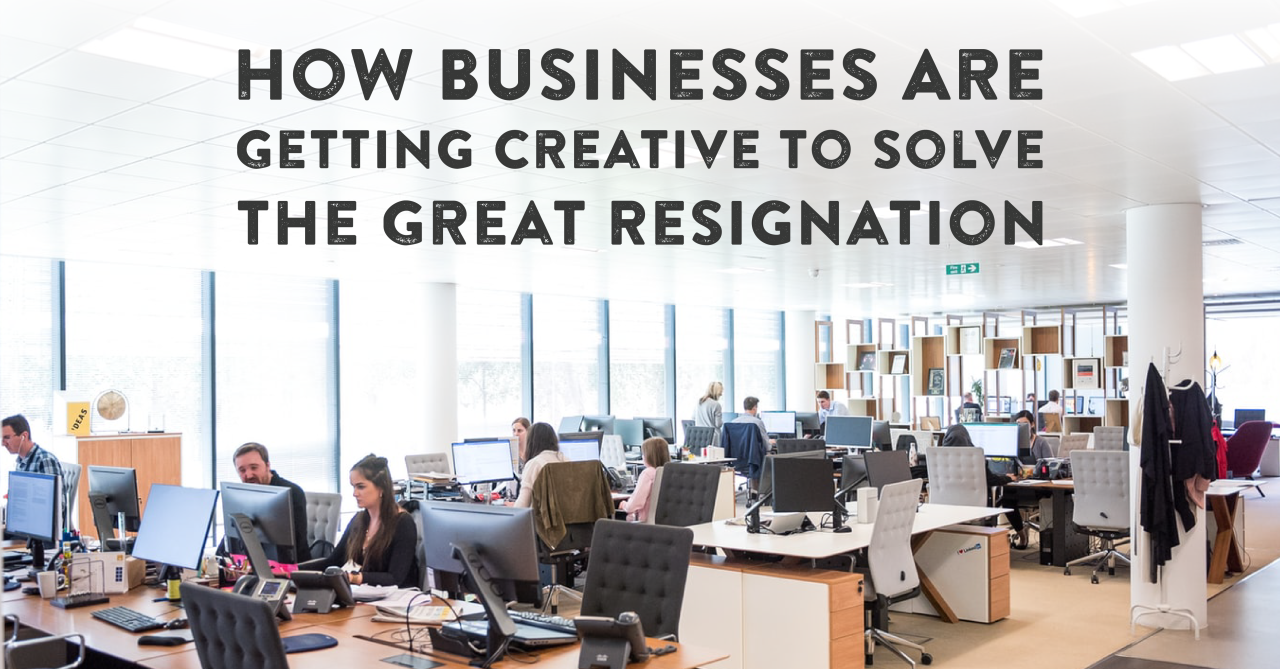 How Businesses Are Getting Creative to Solve the Great Resignation

After dealing with the effects of the Great Resignation for more than a year, many businesses aren’t seeing the labor shortage change quickly enough. While the number of people leaving their jobs has slowed slightly from a record high of 4.5 million workers in November 2021, the “Big Quit” likely isn’t ending anytime soon. In fact, a recent McKinsey survey found 40% of employees say they’re “at least somewhat likely” to quit in the next few months.

In order to stem high turnover rates, companies and leadership teams have gone through their own “Great Re-Evaluation” these past few months and spent countless hours adapting and improving their workplace cultures. They’ve listened to their employees’ needs, built trust, set clear work expectations and addressed employee burnout in a variety of ways. They’ve solved the culture piece of the equation, but they’re finding it’s still not enough. So where do businesses go from here? Here are some of the new strategies and solutions companies are implementing to swing the pendulum in their favor.

At Pinnacle Business Guides, we’ve seen many of our clients offering signing bonuses to attract right-seat workers. Before the Great Resignation, most companies used to reserve signing bonuses for high-level positions, but the ongoing need for talent has made them extend it to all levels. And they’re not alone. According to GlobalData, the number of companies that advertised a signing bonus grew five times between August 2020 and August 2021, with certain firms offering bonuses upwards of $100,000 for certain specialty jobs. In a competitive job market, a signing bonus can attract highly-skilled candidates who might have several offers. They can also help businesses bridge the gap between the candidate’s desired salary and what they’re currently able to offer. If a candidate is asking for $30,000 more per year but that’s not in the company’s budget, a signing bonus of $3,000 may be a great place to start.

Long gone are the days most employees stay at the same company for their entire career. Prior to the Great Resignation, the average employee tenure was around four years. Now, it’s less. That’s why businesses are beginning to couple signing bonuses with incentives like loyalty bonuses in order to reward their teams for sticking around. Companies are writing bonus structures that outline how much money employees will receive if they stay for six months, one year and even five years. And it works! Employees who receive loyalty bonuses say they’re more likely to feel appropriately compensated, be more productive and even recommend open positions at the company to people they know.

Besides bonuses, employers are also increasing salaries across the board in order to compete in the tight labor market. New hires or those who switched jobs saw a record high 8% increase in their wages in December last year compared to 2020. Meanwhile, salaries for existing employees rose a record 5.9% as well. So, staying on the job is becoming nearly as valuable as finding another.

If pay brings employees in, benefits make them stay. As such, employers are also revamping their benefits programs to combat the “talent tsunami.” According to a recent survey, nearly 70% say they’re customizing their benefits programs in order to compete for top talent. One way companies are beginning to differentiate themselves is by rolling out employee benefits over the course of a year, rather than offering them immediately on Day 1 or even Day 31 to new hires. They’re flipping the script and spreading out certain benefits like 401(k)s, vacation days and healthcare coverage over twelve months in hopes of boosting both employee loyalty and retention rates. By placing a value on the benefits themselves, employers hope to incentivize new employees to stay longer and to reward those who’ve been with the company the longest with more perks.

One field that’s seen a high attrition rate over the last year is Sales. Months of quarantining, social distancing and video conferencing forced many sales professionals to leave their jobs. To retain and attract sales people these days, businesses are offering more aggressive sales compensation packages. Plans that promote tiered sales pay often drive better productivity and performance. Ultimately, the more someone works and the more sales they make, the more they’re compensated — thus, a win-win.

6. Calculating the Cost of Turnover

It’s no secret; employee turnover is expensive — and not just because of the increase in wages, bonuses and compensation packages. It’s estimated that losing just one employee can cost a company 1.5-2 times that employee’s salary. For C-suite executives, the cost of turnover can be a whopping 213%. The loss of knowledge and productivity combined with the time, price and effort of searching, interviewing and onboarding all adds up. Over the past several months, companies have been forced to reassess their unique costs of turnover, and it’s urged many to institute one or more of the previously mentioned solutions. By retaining new, loyal employees for at least a year, the cost of turnover is cut in half. By two years, it’s even.

Companies are also rethinking their own roles and reinventing how they deliver their services. The majority of executives — 83% — say their companies currently invest in automation tools, while 78% are very likely to invest more in automation as a result of worker shortages. More and more of our Pinnacle clients are looking to eliminate their high turnover roles this year, and they’re turning to vendor automation as the answer.

Even though the Great Resignation is still ongoing, the tide is beginning to turn for employers, especially those who are implementing some of these strategies. But a word of caution — if a company doesn’t have a solid business operating system, adding in these strategies could be very expensive and drive them out of business. At Pinnacle, we work with companies nationwide to help them pivot from chaos to clarity and move from going to growing. By creating and adopting smarter solutions now, businesses can create a more stable employment environment in the months and years ahead.